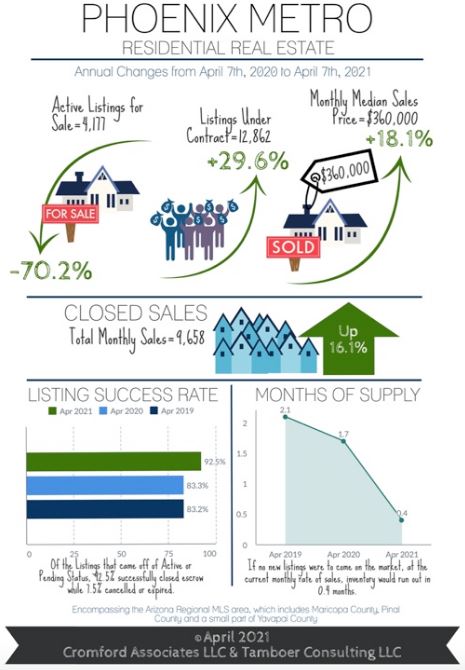 With 54% of all sales closed over asking price so far in April, the average sale price per square foot is now higher than the list price for every price range up to $1M.  In a balanced market, homes typically sell within 97% of list price; that percentage is now 101%. This means that, for the past month or so, the majority of list prices have been the starting price for where negotiations begin instead of a top price to work down from. In past extreme seller markets, $5,000 over asking was typically enough to win a contract; that was true last year as well when the market took off.

The median sale price is now $360K. Since January, the sales price per square foot for a home between $300K-$400K has appreciated 6%.  That’s approximately 2% per month and the current sale price to list price ratio within the price range is 102.4%.

If this rate of appreciation continues in the short term, a buyer who paid 4% over asking price on a $360K home ($14,400 over) would recoup their investment through appreciation in approximately 2 months.

The luxury market has been exploding since last summer and continues to be at the strongest level ever seen in Greater Phoenix. The number of listings under contract over $1M is up 156% over last year; but the number under contract between $2M-$3M is up 296% and over $3M is up  212%. In a typical market, sales prices in this range would be landing around 93% of list price.

However in the 2021 market, the sales price ratio is averaging 98% of list. The luxury market is also keeping up with the rest of the market in terms of marketing time.

Prior to contract, half of the contracts accepted valley wide in the last week were on the market 6 days or less.  Over $1M, the median was 12 days prior to contract.  Over $2M, the median is 67 days. The market over $1M is outperforming in terms of annual appreciation in sales price per square foot.

Thank you for contacting us, we'll get back to you shortly.

Sorry, we are unable to send your message at the moment. Please try again later.